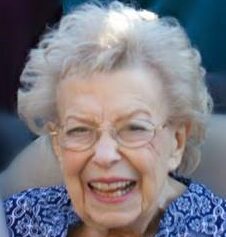 Margarette Helene Kear, of Waterville, Ohio passed away on Tuesday, November 23rd, 2021 after a rich, full life at the age of 96. After months of failing health, she died quickly and peacefully in her home in Salem, Oregon with family by her side.

Margarette was born on April 12th, 1925 in Toledo, OH to Elsie Downs (Schubert) and Milo Downs. As a girl growing up and through her early adult life, she lived in Waterville, OH.

She graduated, valedictorian from Waterville High School. After completing high school she attended art classes at the Toledo Museum of Art and went on to beauty school and became an accomplished cosmetologist. She worked at the Waterville Beauty Shop in business with her mother for many years. She was a life time member of the American Legion Women’s Auxiliary enrolled by her mother shortly after her birth.

In 1941 Margarette met the love of her life, Kenneth Kear, he affectionately called her Peg.  On Easter Sunday, April 21st, 1946 Margarette and Ken were married at the Lutheran church in Waterville. They lived together almost inseparable for 73 years. She faithfully supported Ken’s military career through 1962 when he was honorably discharged, all while loving and nurturing  their growing family. Her favorite of all the places they lived while in the service, was in 1953 stationed in Athens, Greece. She shared many fun and interesting memories of that time.

After retiring from the Navy, Ken and Peg settled their family in Fremont, CA. Margarette began

a new career in retail sales management, working at Montgomery Wards, Capwells, Youngsters and the Levi Store. In 1978, they built their dream house and moved to Pioneer, CA where they lived until moving to Oregon in 2015. She worked in real estate for many years before retiring.

Margarette was an accomplished seamstress, sewing her’s and her families’ clothing for many years. She took an upholstery class and enjoyed collecting antique furniture to reupholster. She was a published machine knit pattern designer, working with her daughter’s business. She loved light classical, big band, jazz music and dancing. Loving the outdoors, at 19 she was a lifeguard for a park in Waterville. She enjoyed fishing and camping, taking her family on many camping excursions. She was an active Girl Scout leader. Ken and Peg also managed the Woods and Silver Lake Campgrounds in California for five years.

In memory of Margarette, we invite you to plant a tree or grove in her honor: a living tribute.org