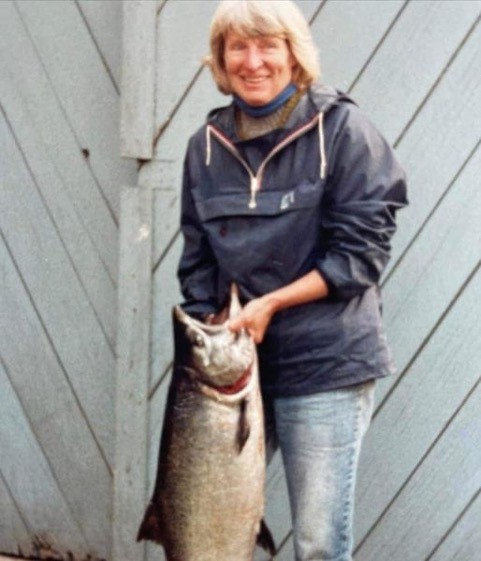 Doreen Lindstedt died peacefully at her home in Silverton, Oregon on October 18, 2022.
It was a beautiful Autumn Day, and she was eager for this last adventure.

Doreen lived in Portland all her life before moving to the Oregon coast in 2005. She moved to Silverton earlier this year to be closer to her family.
She was attracted to forests, bays, tides, lakes and gardens and felt these special places needed to be painted. And paint them she did, as well as portraits, wildlife and pets.

Doreen was a lifelong accomplished artist, especially admired for her watercolors. She taught painting and was a member of the Watercolor Society of Oregon and a Signature member of Northwest Watercolor Society. She won many awards and honors for her paintings, including WSO Silver Award honoring her lifetime achievement in painting.
Doreen imparted her love of painting to her children, grandchildren, and great grandchildren.

Doreen was an outdoorswoman, who enjoyed fishing, camping, hiking and skiing. She and Warren hiked around the perimeter of Mt Hood when first married, and also explored all the mountain lakes they could hike to. She taught her family a deep love of the outdoors.
On a camping trip with granddaughter, Angela, they swam in the John Day River, and cooked an unfortunate road-killed quail by campfire. She was an adventurer!
Doreen loved her dogs and outlived many of them.

Doreen was born to W. Earl Donald and Violet Donald in Portland in 1931. She shared her life with Warren Lindstedt, who departed this world in 2005.
She is survived by her children, Steve, Susan and Caroline Lindstedt, son in law, Tom Tullis, her grandkids, Angela, Aaron and Nicole Lindstedt, and 5 great grandkids who she loved and was proud of.
Doreen leaves many good friends behind, and there were some that went before her, including fellow artist, Richard “Dick” Haward, who was a close and special friend.
She had a long and rich life, and will be missed, and remembered with great affection.