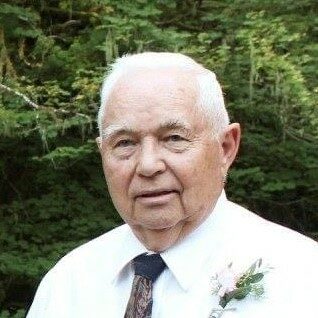 Delbert Corwin Tobiasson, 88, passed away on January 10, 2023. He will be remembered for his love of animals, especially horses. He was a kind, gentle man that everyone loved.

Corwin was born at home on Nov 16, 1934 to Delbert and Dorothy Tobiasson in Logandale, Nevada. His grandpa, Neils Tobiasson, owned a dairy farm there. Corwin started milking at age four. He rode his tricycle while his mom carried the milk buckets. His grandpa made a dam in the creek and set up a generator, which was the first electricity in the valley. Corwin was the oldest child; his mother called him her “right arm.” He was always wiping noses and changing diapers and would be seen with his arm around a brother or sister, talking to one of them.

Children in Logandale Elementary School played marbles at recess, noon, and after school. Corwin was an especially good shooter, one of the best. He had prize taws (shooters), including cats’ eyes. He won enough marbles to fill a gunny sack. Unfortunately, the marbles melted when the family’s house burned.

His favorite uncle, Dwayne Seckinger, and Dwayne’s wife, Joyce, came to Logandale and watched Corwin for a long time as he drove a tractor. Joyce commented on how Corwin “liked to play on the tractor.” His mom said, “He’s not playing. He’s disking, getting the field ready to plant.” He was nine. He learned at an early age the value of hard work. His mom felt bad that he had to work so hard. But as a reward, he received a green Schwinn bicycle, one of the first Schwinns in the valley.

When he was not working, he could be found riding his horse in the desert, as long as he was home to do his chores. He and friends, for example, Nolan Hunt, enjoyed chasing wild burros and horses on the mesa. On one occasion, Corwin took a bucket of grain to the hills and returned with a colt. Family and friends admired Cowboy Corwin for raising a colt and training it to ride. He also hunted and brought home many kinds of game for his mother to cook. One year, he shot an old goose and brought it home for the Thanksgiving dinner. The goose was tough, but his mother was very grateful to have a goose for the dinner. Corwin’s dad told him that he couldn’t waste anything he shot; instead, he had to bring it home for his mom to cook. This principle proved to be a trial one day when he shot a duck over the lake. He honored his dad by obeying; he had to strip down and swim out in the freezing water to retrieve the duck.

In high school, he was a star athlete in basketball, track, and football. He set a record in the Las Vegas tournament in high jump. He was sincerely disappointed in the new “Fosbury Flop,” named after one of his teammates in the area. He thought that the flop was cheating. Corwin was also captain of the basketball and football teams.

One of Corwin’s chores was to milk the family’s cows, morning and night, even when he had a date that night. After processing through a cream separator, the milk went into 10-gallon cans, which Uncle Leland picked up and hauled them on his freight truck to Las Vegas.

Occasionally, five or six boys gathered to hunt frogs in the nearby reservoir and in the flood channel. The boys brought the captured frogs to Corwin’s home. His mother cooked the frog legs, which often jumped in the skillet.

As a member of a 4-H group, Corwin had a small black and white calf.  Using soap and water, he got it ready for show and then displayed it at competitions. Although Corwin’s parents and other family members moved to Ashland, Oregon in 1951, he opted to stay in Moapa Valley and complete his junior year in high school at Overton. He stayed with his Aunt Gladys and Uncle Karl Marshall and with his cousin Jim Whitmore. During one competition, he won a calf. When Corwin left Moapa Valley, the calf remained behind.

Hard work followed Corwin to Ashland. Cousin Delores Jones recalls Corwin driving the Farmall tractor and pulling the hay baler to various farmers’ fields during the summer of 1952 or 1953. Delores, on an iron seat, pushed wires into the hay as the bales moved though the chute. Sister Loya, on an iron seat on the other side of the baler, tied the wires.

In Ashland, one of Corwin’s close friends was Willy Hinkson. That duo spent many hours on their motorcycles, following mountain trails and jumping logs. Another close friend was Marvin Gardner, teasingly nicknamed Marvin Gardens, one of the places found on a Monopoly board. Although Corwin moved to northern Oregon and Marvin moved to Salt Lake City, the two called each other at least annually, just for fun, for friendship, and, when The Other Side of Life beckoned, for comfort.

Corwin joined the Navy at the end of the Korean conflict. He served on the USS Uvalde AKA-88 and then on the USS Montrose, then came home on another ship. He was a machinist mate and had many stories from those times. Navy life became difficult when, in three days, the sailors ran out of fresh milk and had to use powered milk. Resourceful, Corwin asked anyone going ashore to bring him some milk. One at a time, a buddy would come in, wake him up, and give him his milk until he thought he would burst.

Corwin met Ella when the Tobiassons moved into Ashland, Oregon from Logandale. Loya, Corwin’s sister, and Ella became good friends. Corwin and Ella dated casually a few times. Corwin and Ella married on January 22, 1958 in the Los Angeles Temple of the Church of Jesus Christ of Latter-day Saints. They had four children: Rob, Mont, Mike, and Lynae.

Corwin used his skill to bless others. He made special trips to Ashland to install and later service a heat pump for his parents. In 2016, he stopped in White City to service and clean his sister Loya’s air conditioner. Oh, oh! He dropped a screw in the grass and couldn’t find it. Scott’s last memory of Corwin is finding that screw for his uncle.

Corwin held many positions of responsibility. At age 31, he became branch president of the Coquille branch. Every night he and his counselor went to visit one or two families in the branch, until he had met everyone. He was very loved and respected, and he grew to love and rely on the Lord.

One of Corwin’s church callings was Scoutmaster. He took the Scouts on a 50-miler down the Rogue River. Twice, he and the Scouts did week-long survival campouts. Fortunately, everyone survived. He loved the outdoors and being with the young men. He took them on many camping and fishing trips.

He graduated from OTI (OIT) in 1963 in Klamath Falls Oregon, where he learned his commercial refrigeration, air conditioning, and heating skills. This was his lifelong career. He loved meeting people and using his skills to help others. He worked for many companies between Gold Beach and Coquille (Oregon), Sacramento (California), and Salem (Oregon). An asset in the community, and with a reputation for efficient, careful work, he formed his own company

Corwin loved to fish and hunt, his favorite pastime the rest of his life. He learned to fly fish, tying many of his own flies over the years. He hunted with a recurve bow as well as with a rifle. He enjoyed loading bullets. He loved horseshoes. Both Corwin and Ella held the championship of a small horseshoe pitching group in Salem until they discontinued that group shortly thereafter.

Corwin was preceded in death by his parents, Delbert and Dorothy, his sister Verlee, and his brother Robert.