Comyn Leroy, 87, passed away at his home in Turner, OR on Saturday, October 16th, 2021. He was born to Comyn & Lydia Tracy on December 27th, 1933 at their home in Turner. Preceding him in death were his parents, his wife, Marie, daughter, Anna, and son, Clint.

He grew up on the Tracy farm and worked alongside his father harvesting crops, caring for the livestock, milking cows, and helping to keep the machinery in good repair. He attended school in Turner, played the coronet in the band, took piano lessons, and had a good singing voice. In the 50’s he joined the Army, was a private first class, and was stationed in Germany. He serviced H36 helicopters and was a crew chief until he suffered a broken ankle after jumping out of a helicopter.

After his time overseas, he was honorably discharged. Then he settled back to helping on his parent’s farm, married Marie, built a home on his own farmland, raised his family, attended a Christian church, and farmed crops, especially sweet corn. He was also a gifted machinist, worked at Wah Chang, and could create whatever he needed with metal to design and repair his farm machinery.

He enjoyed hunting, fishing, and camping with family and the local boy scout troop for a time. He was a loyal friend, loved his family and country, and rededicated his heart to the Lord during the last years of his life.

He is survived by his daughter, Michele (Scott) Walberg of Turner, son Aaron Tracy of Jefferson, sister Marlene Nix of Turner, nephew Bill (Rhonda) Nix of Turner, three granddaughters, two great-grandchildren, and nieces and nephews on Marie’s side of the family. 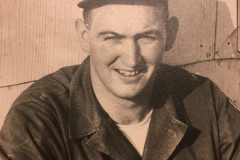