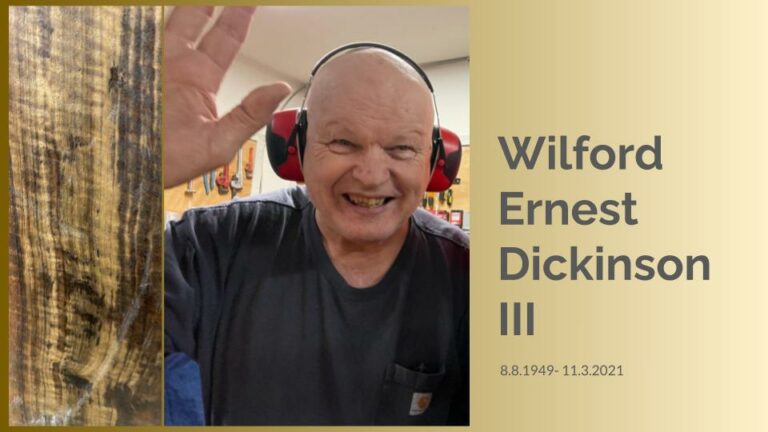 Wilford "Dick" Dickinson III, age 72, passed away on November 3rd, 2021. Dick was born in Skowhegan, Maine to Wilford and Shirley Dickinson on August 8, 1949.

Dick grew up in Santa Rosa, California and graduated from Montgomery High School in 1967. He was very athletic and played both baseball and football for his high school.

Dick joined the Navy in 1969 and spent the first two years in submariner training and the final four years on the USS Gurnard (SSN 662) as a Nuclear Power Plant Operator. He was awarded the following commendations during his service, National Defense Service Medal, Good Conduct Medal, Vietnam Service Medal with one Bronze Star, Republic of Vietnam Campaign Medal, Navy Expeditionary Medal, and the Meritorious Unit Commendation Medal.

After leaving the US Navy, Dick joined General Electric and traveled all over the world working in their Nuclear Power Plants. He spent the majority of his career at Lawrence Livermore National Laboratory, working in many areas, using applied science and technology to make the world a safer place.

One of Dick's hobbies was woodworking and "making sawdust" on his CnC routing machine. He enjoyed gifting his exotic wood creations to family, friends, and neighbors.

Another one of Dick's hobbies was rock-hounding. He and his friend Rand traveled all over the country searching for the rare rocks in both fossil sites and Rock, Gem, and Mineral Shows. Many of the best rocks ended up in his front yard.

Dick officiated the marriage of his granddaughter and grandson-in-law because he considered his grandchildren his greatest pride and joy! They called him affectionally 'Papa'. One of their favorite past times together were to take turns picking dinner and movie night.

Donations to a children's education program of your choice, in lieu of flowers. Per Dick's request, there will be no services.