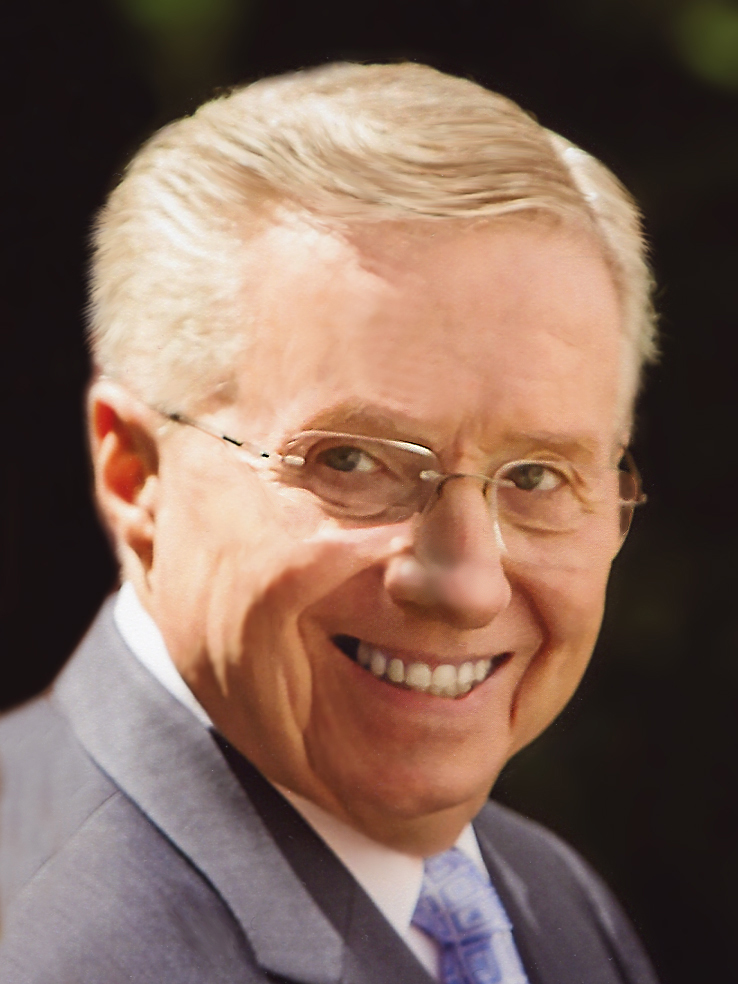 On December 30, 2021, Robert Morris Decker passed away due to complications during surgery.  Robert (Bob) was born on July 15, 1937, in Salt Lake City, Utah to Clyde Morris and Terese (Roberts) Decker.  His father died when he was just seven years old, so he grew up with his mother in Centerville, Utah and graduated in 1955 from Davis High School.  He married his high school sweetheart, Kathryn (Kathy) Barber, in 1959 in the Logan, Utah temple of the Church of Jesus Christ of Latter-day Saints and they were married for 62 years.  They raised four children together.

Bob graduated with a Masters degree from the University of Utah in Salt Lake City in 1967 while working as the Recreation Director at the Utah State Training School in American Fork.  This was the beginning of many years of working with and for the physically and developmentally disabled. In 1970 he became Director of the Idaho Child Development Center in Idaho Falls, Idaho.  He also served in many capacities for the state Department of Health and Welfare in Idaho.  In 1974 he became administrator of the Idaho State School and Hospital in Nampa. In 1979 Bob moved his family to Salem, Oregon where he served as vice president of operations for Truscan Corporation which owned and operated skilled nursing facilities and intermediate-care facilities for the developmentally disabled throughout the western United States.  In 1980 he and co-worker, Don Bybee, formed Chartham Management.  The company eventually operated 41 long-term care facilities in seven western states.  In 1987 he formed his own company, Westcare Management, which also owns and operates health care facilities.  He retired at the age of 80 and the company is now in the care of two of his sons.

During his career Bob served as a consultant to a variety of health care organizations and was often sought after as a speaker nationwide. He served as president of the Oregon Healthcare Association and on many boards for ICF/MR facilities for the American Health Care Association.  He did consulting and conducted numerous seminars throughout the United States and helped develop many programs to improve the care and quality of life for the developmentally disabled.

He enjoyed serving in many capacities in his church–particularly teaching the young people and adults in Sunday School.  Known for his selfless generosity, he derived great satisfaction from being able to make a difference in people’s lives by helping them in any way that he could. He also delighted in making others smile or laugh with his upbeat sense of humor. But the greatest joy of his life was his family.  He loved his children, grandchildren and great grandchildren immensely and was proud of every one of them.  Loved and respected by so many, he will be greatly missed.

Bob is survived by his wife, Kathryn, and their four children: Todd (Jeanette) Decker, Tamra (Rex) Christensen, Tony (Pam) Decker, and Bryan (Ricki) Decker. He had 17 grandchildren and 12 great grandchildren. He also claimed as his own, Donna (Moses) Soria and her family and Todd (Gail) Kelly.

Private family funeral services will be held on January 15, 2022, but will be broadcast for all others.  You may find details and broadcast link here.

In lieu of flowers, memorial contributions may be made to ARC of Oregon, Oregon Special Olympics, or University of Utah department of Health

~Robert will be laid to rest at Belcrest Cemetery~ 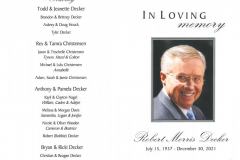 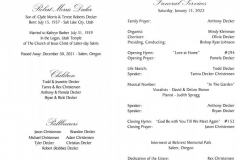