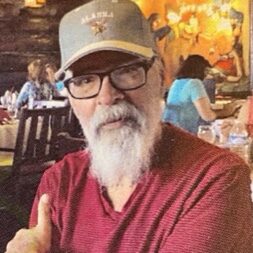 On Thursday, November 17, 2022, Michael Holverstott, husband, father, grandfather and brother passed away at the age of 71.

Mike was born on April 19, 1951 in Seattle, Washington to Kenneth and Mae Holverstott. Mike spent his childhood and school-age years in Seattle.  Graduating from Lincoln High School in 1969.

Mike held various jobs throughout his adult life having worked for both Bethlehem Steel and NOAA.

Mike had a remarkable ability to connect with people and make friends wherever he was.  He loved music and art and played the the clarinet in his high school marching band and orchestra. Mike enjoyed drawing caricatures and was also an avid reader of American Indian history.  In his younger years he enjoyed riding a motorcycle.

Mike was preceded in death by his father Ken and his mother Mae.  He is survived by his wife Monica, her daughter Megan and son Christopher.  His extended family includes his two sisters, Patty Heavner and Carla Coward and their husbands (both Davids) as well as numerous cousins, nieces and nephews and a new grand daughter.

No services will be held per Mikes wishes. Cremation will conducted by Johnson Funeral Home in Salem, Oregon.