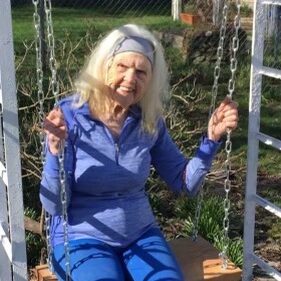 Mary’s parents met while traveling west on a wagon train along the Oregon Trail.  She was the 9th of 12 children.  Mary met Chase in Boise Idaho and married in Union County, Oregon in 1930.  During Mary’s lifetime she raised three children living in tents while following Chase’s work on gold dredges throughout the west. Later in life she studied nursing and briefly worked in the local hospital.  She also drove school buses until she opened her own beauty salon in northern California.

Mary and Chase settled in Oregon in the late 60’s after Chase retired.  She attended the local community college studying Data entry and writing.  She lost Chase in 1988.  Mary became a very independent woman, thriving on her own, taking care of her own home and yard until she was 106 years old when she moved in her own apartment.  She continued her lifelong passion for gardening, poetry, and music, writing songs, and playing multiple instruments.  She loved to sew and crochet with her daughter Edith.

As we look at her life, we are inspired by her independence, tenacity, pioneering spirit, and her hunger for knowledge.