In Germany she worked as a legal secretary. Hannelore and Herbert immigrated to Ontario, Canada in 1953, and while there they became Canadian citizens. In Canada she worked as a housekeeper and later as a business secretary. Their only son, Ralph, was born in Orillia, Ontario, Canada. In 1960 they immigrated to San Pedro, California. Hannelore and Herbert became U.S. citizens in 1967 in Kingman, Arizona where they owned a motel on Route 66.

Hannelore and her family arrived in Oregon in 1969. She is perhaps best known for her lovely German accent, beautiful smile, loving generosity and for owning the Mode O’ Day store on Main Street in Dallas for 18 years. In the United States she was known by most people as Hanne or Oma, although in Germany she was known as Lore. Hannelore died peacefully at home on June 20, 2019.

She is survived by her son Ralph (Vicki), grandsons Shane (Amy) and Chaz, and great-grandsons Wesley and Logan. She is preceded in death by her husband Herbert who passed away July 6, 2005. Her parents and her sisters, Anna Klinkenberg and Maria Elfriede Klinkenberg Meissner, also preceded her in death. Maria is survived by two daughters, Petra and Eva, who live in Germany. 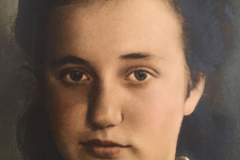