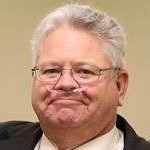 David Alden Phillips Jr. passed away on Tuesday May 27th, from the effects of a terminal lung disease discovered by the doctors seven months previously.

Dave was born June 13, 1961 in Los Angeles to David and Norma Phillips. He was the third child and only boy. His sisters couldn't say Junior when they were little so he became "Dunner". His family later moved to Santa Maria, California where he spent his youth. He was always active and trying to work and especially loved anything mechanical. He loved visiting his Uncle George and Aunt Mildred Carpenter in Brawley California during the summers. They owned a trucking company that hauled sugar beets in the summer and gravel in the winter. Dave would ride around with his Uncle to check on the trucks and delivery. Dave loved trucking; he loved the camaraderie of the drivers, the smell of grease and dirt from the fields and the sound of a Jake Brake. He loved thumping the tires with a tire iron and hearing the hard reply. Most of all he loved the people he shared the experience with.

Dave moved to Oregon in 1992 to get a new start in life and met Tammi Jackson Anderson in 1994 at a grocery store. They married two weeks and three days after meeting. He loved her and her four children, along with his son Christopher who he reconnected with later in life. They had two more children together, Albert and Karli.

He was always looking for ways to provide a better living and owned several businesses at different times. His favorite was owning his own auto repair shop in Turner. He was very good at diagnosing and fixing problems. Due to his health issues, the shop was sold. He had the ability to tackle new challenges and excel. He seemed to always find those needing assistance and felt complete when helping others. He knew no strangers.

David had struggled with health problems for many years and would bounce back until the next health challenge came along. He only had two speeds, on or off. He was very competitive. His health took a turn for the worse on Friday, and after a couple of long days and nights of struggling, he passed peacefully at home with some of his family at his side.