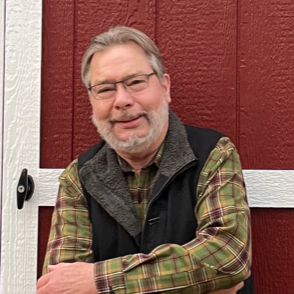 George had this verse starred in his bible. He died in faith and is enjoying his eternal reward. This brings much peace to his wife and family.

And no man takes it to heart;

Merciful men are taken away,

While no one considers

That the righteous is taken away,

He shall enter into peace;

They shall rest in their beds,

Each one walking in his uprightness.

George Edward Mikkola, beloved husband, father, grandfather, and friend returned to the arms of his Heavenly Father on July 7, 2022. George, 67, passed peacefully at his home in Salem, Oregon with his steadfast companion Martin, The Miniature Schnauzer, by his side. George is survived by Karen, his wife of 41 years. He often referred to her as his “one true love.” George and Karen just celebrated their 41st wedding anniversary on July 4th, 2022, at their second home in Deep River, Washington. The 4th of July was a fitting day for George and Karen to be married on, as there was no shortage of fireworks in their marriage. George and Karen each had daughters (Lisa and Kamen) from previous marriages before they met. They worked hard to make a bonded and loving family, often including many elder members of the family in their activities. After 5 ½ years of marriage, God blessed George and Karen with their daughter Natalia, and again 4 years later when their son Bryant was born. Each child was made to feel valued and cherished by these two parents. Creating a truly blended family was hard work, but because of George and Karen’s love, commitment, and perseverance, each of these children, along with their children, stand beside their parents with all that they are and feel wholly a part of this family. George was so proud of each and every one of his children and grandchildren,  and he loved them all so much.

George was born January 9, 1955, in Coos Bay, Oregon where he spent his early years and was the third oldest sibling in a family of ten. He moved in with his grandparents Gunnar and Lila Person (Salem, Oregon) to finish his senior year of high school. George graduated from North Salem High School, Class of 1973. George was the consummate worker throughout his life. He began his trade as a hod carrier for various construction companies in Salem, Oregon. During his time with the brick masons, George had the opportunity to bring his brothers Don and Robert into the trade. It was a great joy for George to have the opportunity to collaborate and joke with his brothers daily. After 15 years as a hod carrier, George switched to plastering, and his custom plaster work was widely known in the Willamette Valley. He was often called upon to help restore many historic buildings downtown such as the Elsinore Theater in Salem. Because his work was so well-known, he also had the opportunity to work on custom homes, oftentimes befriending his clients, some of whom became close, lifelong friends. The greatest joy of George’s career was the time he spent side-by-side with his son Bryant who was his apprentice for 4 years.

In many ways George was a Journeyman of Life; George was prepared for most any given situation. He often had on hand the tool that was needed, expertise that baffled comprehension, wisdom at the ready, and best of all, great snacks. He was also a craftsman, never encountering a repair task or house project that he could not tackle. He was well-read, clever, artistic, had a great sense of humor, a music-lover, and possessed a terrific record collection. George never met a stranger because he had the gift to converse with anyone, anywhere, on any subject. George always had time for others, whether praying with them, helping with a task or project, sharing a kind word, offering advice, or his favorite activity, proclaiming the Gospel of Jesus Christ.

George’s Christian faith was a cornerstone in his life. He was baptized on the 25th day of December 1977, and from thereon he began to change his life. He attended Salem Heights Church for over 42 years, participated in the Awana program, was a church Greeter, and greatly enjoyed studying the Bible and fellowshipping with others. He was passionate about spreading the Gospel of Christ, witnessing to others, and taking any and all opportunities to pray with others.

George was a devoted husband, father and grandfather and his loss is immeasurable to this family. George loved nothing more than spending time with his family at their homes in Salem or Deep River, on his boat at Detroit Lake, or simply gathering for family celebrations at his favorite restaurant, Los Baez. He was the North Star of his family, and his guiding light will be forever missed. Often, when asked how he was doing, George’s favorite response was, “better than I deserve” …and as we reflect on our great loss, it turns out that George was better than we deserved. Our loss is beyond measure, and he will remain eternally in our hearts.

In lieu of flowers, donations can be made to Salem Heights Church, attention “The Most Excellent Way Ministry.”