Barbara Jean Hensley 59 of Salem passed away on March 7th, 2019 surrounded by loved ones.

Barbara was born in Lubbock, Texas on April 27th to Silas Glen Hensley Sr. & Marie Hensley (Berger). In 1964 their family moved from Texas to Arizona where they lived until 1968 before moving to Portland, Oregon. They would then move to Hubbard, Oregon in 1972. Barbara attended North Marion High School. Her Family owned and operated The Hubbard Market where she worked and helped manage for 25+ years.

Barbara enjoyed cooking, gardening, watching the Portland Trail Blazers basketball games and most of all Barbara enjoyed spending time with her grandchildren and family.

Barbara is preceded in death by her Father Silas Glen Hensley Sr. (1978), Antonio Garcia (2017) Denise’s Father and many Aunts and Uncles. 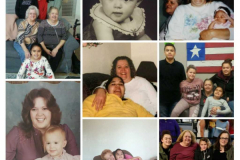